Claire Hummel was born and raised in the quiet hamlet of Los Angeles, California. She is currently working as an artist for Microsoft Game Studios Publishing.
Claire gravitates naturally towards anything having to do with her childhood haunts of Disneyland, Myst, national parks, museums, and Hawai’i, thus ensuring a lifetime interest in nostalgic escapism. She also has an extensive, practical knowledge of period costuming and snakes, in case you’re into that sort of thing. 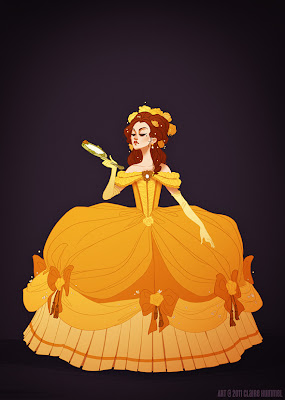 Most of the world seems familiar with the famous Disney princesses, from Snow White to Pocahontas their likenesses are burned into our memory, fan or not. What makes them so iconic? Many would argue it was their lavish and flowing costumes, based on historical fashion. But just how correct are those period fashionable dresses? Claire Hummel, an illustrator with a passion for historically accurate costuming recently reworked many of the famous ladies, giving them new garb fitting a stylish member of their periods society. Many of the original Disney costumes weren’t far off, while a few are vastly different.

Ariel’s dress is based on 1890′s evening gown fashion

Cinderella’s dress is based in the mid-1860′s

Sleeping Beauty based on the 14th Century in France

Princess Tiana living in New Orleans during the 1920s

Animation can explain whatever the mind of man can conceive. This facility makes it the most versatile and explicit means of communication yet devised for quick mass appreciation. Walt Disney
at 3:03 PM