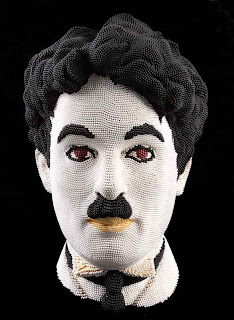 David Mach studied at the Duncan of Jordanstone College of Art, Dundee from 1974 to 1979 and subsequently at the Royal College of Art, London from 1979 to 1982. Mach is a Scottish sculptor and installation artist. David’s artistic style is based on flowing assemblages of mass-produced objects.
These impressive works of art are the result of meticulous work with thousands of tiny, colourful, Japanese matches which have been used to portray famous faces and recreate legendary artworks. However, despite his hard work and the hours he put in to creating the sculptures, Scottish artist David Mach likes to open his exhibitions by setting them on fire. It only takes a few seconds and sends the flames up to 6ft in the air, leaving a charred version of the original, but the 55-year-old says he is not destroying his work, but creating new art.
‘You lose the colour but you different shades of ash, different greys and blacks. It’s a real ferocious act of creation. You don’t lose it, what you get is another thing.’