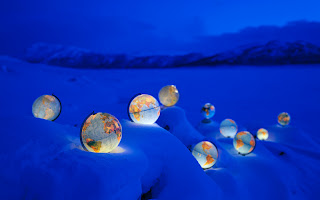 Rune Guneriussen, born 1977, in Norway.
This amazing artist is located in eastern Norway. He works  the transition between art installation and photography.  The isolation of some objects are turned into installations, most of these are not seen by the audience, but only photographed.
The work on objects such as tables, lamps, globes, phones and chairs started in 2005, and has been photographed all over Norway. A cool approach to the balance between nature and culture, but also a different perspective to an object story telling.
As an artist he believes strongly that art itself should be questioning and bewildering as opposed to patronising and restricting. As opposed to the current fashion he does not want to dictate a way to the understanding of his art, but rather indicate a path to understanding a story.

All objects, all phases of culture are alive. They have voices. They speak of their history and interrelatedness. And they are all talking at once! - Camille Paglia
at 4:18 PM