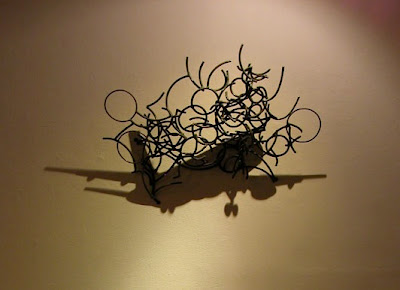 New York-based artist Larry Kagan creates abstract wire sculptures that transform into recognizable figures when exposed to light from a precise angle. Similar to the likes of Diet Wiegman, Tim Noble and Sue Webster, Kagan's sculptures cast figurative shadows that draw the eye in amazement. Rather than focusing on the constructed steel structure, one's gaze is turned to the shadow drawings on the adjacent wall.
Kagan explains, "We are more or less aware of the presence of shadows, since they tell us something about our environment, but we do not actually look at them – unless they call attention to themselves by some unfamiliar or unexpected behavior. My challenge was to induce viewers to actually look at the shadow rather than solely at the steel. I began shifting more of the narrative burden to shadow. The more content the eyes could detect in the shadow, the more time and attention they would expend on exploring its details…"
The artist's fascination with his chosen medium and method stems from the fact that the shadows force viewers to rethink the way they see something. More than just a simple drawing on a surface, the light sculptures or "shadow drawings" are forms of stored information extracted and revealed through light. On the artist's website, you can toggle the light on and off in his sculpture gallery to see the difference that shedding a little luminescence on mangled wires can make.