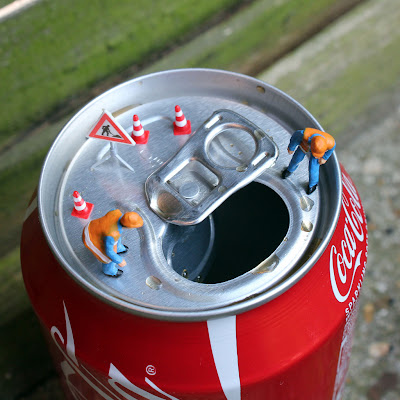 The ‘Little People Project‘ started in 2006. It involves the remodeling and painting of miniature model train set characters, which I then place, photograph and leave on the street. It is both a street art installation project and a photography project. The street-based side of my work plays with the notion of surprise and I aim to encourage city-dwellers to be more aware of their surroundings. The scenes I set up, more evident through the photography and the titles I give these scenes aim to reflect the loneliness and melancholy of living in a big city, almost being lost and overwhelmed. But underneath this, there is always some humor. I want people to be able to empathize with the tiny people in my works.
I leave all the figures behind after I photograph them. To be honest, I prefer not to know what happens to them after I leave. Many are probably destroyed — stepped on, swept away — but for me, it’s far better that their fates remain unknown. It feels right, somehow, that they really are lost. Project by Slinkachu
One man is equivalent to all creation. One man is a world in miniature. Albert Pike
at 9:40 PM