Egyptian protesters carry an obelisk with the names of those killed during last year’s uprising at a huge rally in Tahrir Square in January. It marked the first anniversary of the uprising that toppled president Hosni Mubarak. Debate raged over whether the rally was a celebration or a second push for change.
ميدان التحرير
اروع صور العالم في 2012
مسلة الشهداء 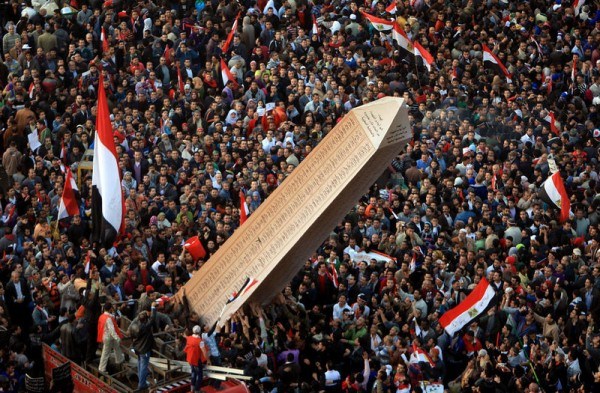 New taxi cabs in a flooded car park in New Jersey after Hurricane Sandy made landfall in October. The superstorm devastated the Northwestern United States, costing an estimated $65 billion of damage. At least 250 people were killed in seven countries along the storm’s path.
This is a “Wow” moment… here is a compilation of the Agence France Presse (AFP) most enduring images of this current year. We selected some impressive, shocking, saddening, funny and some very touching imagery as a retrospective of what had happened worldwide in 2012. Check this out!

A woman looks at an installation of fishes made of recycled plastic bottles in Botafogo beach, in Rio de Janeiro in June. The artwork was put in place to coincide with the UN Conference on Sustainable Development, Rio+20. The conference was the largest ever organized, with 50,000 delegates.

A Dutch local resident, standing in his house, looks to high waters level through his window, in Dordrecht on January 5, 2012. Gale force winds reaching up to 110 kilometres (about 70 miles) an hour as well as heavy rains are expected along the Dutch coast. About a quarter of the country sits below sea level.

Two women kiss in front of people taking part in a demonstration called by the “Alliance VITA” association against gay marriage and adoption by same-sex couples on October 23, 2012 in Marseille, southeastern France. France on October 10 named October 31 as the date when a draft law authorizing gay marriage will be approved by government
ministers, amid mounting opposition to the proposed legislation.

This photo provided by NASA shows space shuttle Enterprise, mounted atop a NASA 747 Shuttle Carrier Aircraft (SCA), flying near the Intrepid Sea, Air and Space Museum on April 27, 2012, in New York. Enterprise was the first shuttle orbiter built for NASA performing test flights in the atmosphere and was incapable of spaceflight. Originally housed at the Smithsonian’s Steven F. Udvar-Hazy Center, Enterprise will be demated from the SCA and placed on a barge that will eventually be moved by tugboat up the Hudson River to the Intrepid Sea, Air and Space Museum in June.

Tibetan exile Jamphel Yeshi, 27, runs as he is engulfed in flames after he set himself on fire during a protest in New Delhi last march. Tibetans at the rally were protesting against an upcoming visit to India by Chinese President Hu Jintao, according to police.
Self-immolation is common among Tibetans protesting against Chinese rule.

US President Barack Obama does pushups during backetball shooting drills during the annual Easter Egg Roll on the South Lawn of the White House April 9, 2012 in Washington, DC. The First Family participated in the yearly event where the South Lawn
is opened up to guests to participate in various egg rolls and other activities.

In July, visitors to central China’s Henan province gathered to watch giant gushes of water get released from the Xiaolangdi dam to clear up the Yellow river and prevent localized flooding. China is hit by downpours every summer, often causing fatalities – in 2010 the nation’s worst flooding in a decade left more than 4,300 dead or missing

A man walks past an ice covered car on the frozen waterside promenade at Lake Geneva in the city of Versoix, near Geneva in Switzerland, in early February. A vicious cold snap swept across Europe in the late winter, and the associated death toll soon rose to more than 260

A man with a Guy Fawkes mask takes part in a protest against the Spanish government’s latest austerity measures in Madrid, on July 19, 2012. Several hundreds government workers joined the protest after conservative Prime Minister Mariano Rajoy announced, on July 13, the latest measures to lower Spain’s deficit, a 65-billion-euro (80 billion USD) austerity package involving among other things an increase in the VAT (TVA) tax and cuts in unemployment benefits.

Sunset on January 16, 2012, over the cruise liner Costa Concordia aground in front of the harbor of Isola del Giglio after hitting underwater rocks on January 13. Pier Luigi Foschi, head of the Costa Crociere line, said the company had commissioned several firms to look at the best way to salvage the 114,500-ton vessel lying on its side. The 290-metre (950-feet) long Costa Crociere, which is 17 decks high, has a large gash in its hull from running on to rocks before it capsized on Friday night. Coastguards said the half-submerged giant ship had now stabilized as weather conditions off the Tuscan coast improved but added that there was still a risk the hulk could slip off a rocky shelf into the open sea and sink entirely.

A child looks out from a make-shift tent as under heavy rain during a visit by Under-Secretary General of United Nation for Humanitarian affairs Valery Amos to the refugee camp of Kibati in Goma on August 8, 2012. Unrest in the country has led to the

Firefighters of Alcoy and Elda try to extinguish a fire in Torre de Macanes near Alicante, on August 13, 2012. One person was killed and three injured Sunday as firefighters battled wildfires across Spain, authorities said, the latest victims in a sweltering summer of forest blazes.

People board the NY Waterways ferry to Manhattan after the storm. On October 26, three days before the storm made landfall, Governor Andrew Cuomo declared a state of emergency for every county in the state of New York. The storm left parts of the state without power, including much of lower Manhattan south of 34th Street.

Supporters of Antonis Samaras, leader of the Greek conservative party New Democracy, wave flags during a pre-election speech in Athens last May. Mr Samaras was elected Prime Minister of Greece in June this year as the country rebelled against strict austerity policies imposed by EU and IMF leaders.

A Syrian man holds his robe while walking in the partially destroyed Salaheddin neighborhood of Aleppo, under the control of the Syrian army on September 3, 2012. Syrian troops backed by artillery and warplanes fought rebels on multiple fronts on September 5 as peace envoy Lakhdar Brahimi described the death toll as “staggering” and destruction “catastrophic.”
When the power of love overcomes the love of power the world will know peace. Jimi Hendrix
at 10:13 PM