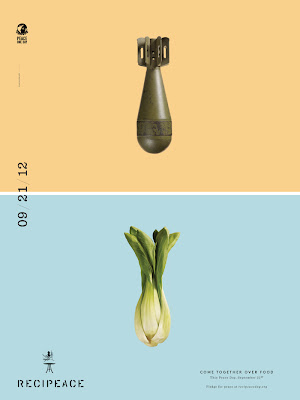 .Recipeace is a social movement aims to join conflicting people through food in celebration of International Peace Day on September 21, 2012. To build awareness, Leo Burnett Chicago is asking chefs, restaurants, food ambassadors and foodies around the world to join the Recipeace movement. People can pledge for peace by cooking a meal inspired by recipes that have resolved conflict in history, visit a participating restaurant reserving tables for peace meals or tweet ideas of individuals who should come together over food for peace.

“A single glass of champagne imparts a feeling of exhilaration. The nerves are braced, the imagination is agreeably stirred; the wits become more nimble. A bottle produces the contrary effect. Excess causes a comatose insensibility. So it is with war: and the quality of both is best discovered by sipping.” Winston Churchill (1871-1947)  ‘The Wit of Sir Winston’ (1965)
at 5:16 PM