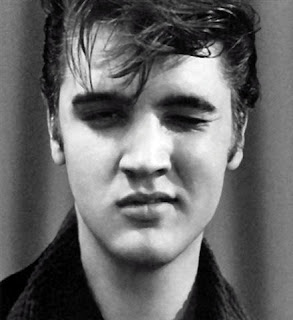 Elvis Aaron Presley (January 8, 1935 – August 16, 1977) was an American singer and actor. A cultural icon, he is commonly known by the single name Elvis One of the most popular musicians of the 20th century, he is often referred to as the "King of Rock and Roll" or "the King".
Some of the most amazing and rare pics of him


Elvis in a feather headdress

Elvis Presley is inducted into the Los Angeles Tribal Council by Chief Wha-Nee-Ota for his ‘constructive portrayal of a man of Indian blood’ in Flaming Star. Picture taken around 19th-23rd December 1960.

For “The Courageous Heart: A Life of Andrew Jackson For Young Readers” Humes High School, Memphis.

…
Image 1 from Photobooth: The Art of the Automatic Portrait (Abrams)

“On December 21, 1970, Elvis Presley paid a visit to President Richard M. Nixon at the White House. The meeting was initiated by Presley, who wrote Nixon a six-page letter requesting a visit and suggesting that he be made a “Federal Agent-at-Large” in the Bureau of Narcotics and Dangerous Drugs.”
- The George Washington University